Share All sharing options for: An Evening with Steve Quis Part IV

During the rain delay of last Friday's game (yes, we are finally finishing this series of posts) we exited the ballpark and entered the Channel 4 studios.  Mr. Quis led us through the building to the Channel 4 offices.  He gave us a tour.  Surprisingly the floor was filled with cubicles and the vast majority of them were empty.  It seemed like there were probably 50+ cubes and about 20 being actually used.  Channel 4 like the Padres are doing more with less.

The floor was mostly empty but the people that were there were hard at work, editing MLB and Padres highlights, working on on-screen graphics or being friendly to us.  Everybody at Channel 4 is really, really nice. 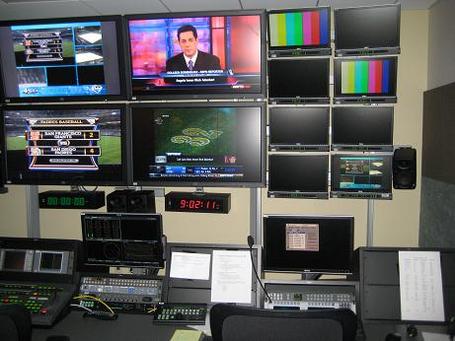 After the tour we sat around outside the cubes, chatted with Mr. Quis and oked around the on-air talent's cubicles. Dex put his business card in Weisbarth's suit coat pocket.  He also wrote a post it note saying hi to Jenny Cavnar and put it on her monitor.  Ed Barnes cube has about 80 bobble heads in it, I'm not sure how he can get any work done in there it's so cluttered.  There are sporting goods everywhere.  We saw a razor scooter sitting between Quis' and Scanlan's cube.  Apparently they use it to get around the building faster.  Of course we had to give it a try.

Finally the game started again.  We watched and every time a note worthy play happened Quis would yell out to the Post Game editors "Add it!"  They'd yell back to him that they would add it to the post game highlights.  After Hairston hit the home run I yelled "Add it!", doing my best Quis impersonation, before him just to see what it's like to have that kind of power.

The game finally entered the last inning and we went into the actual Post Game studio.  Surprisingly it's a pretty big room and all the cameras are computerized so they only need one guy working behind the scenes.  There are usually only three people in the studio, the two hosts and the guy directing and doing camera work.  That day however there were 5.  Dex and I got seats about 5 feet from the Post Game desk. 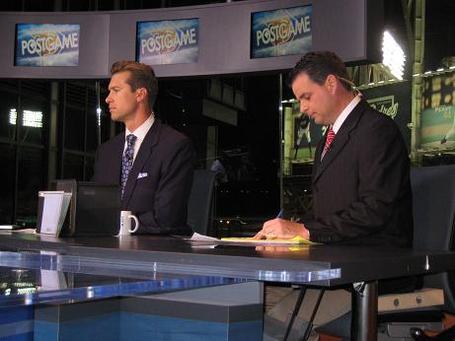 Notice in the picture above Quis sits on a box, he calls it his jbox.  At one point before the show started he was like "Where's my jbox at?  Where's my jbox?" I responded with my arms open wide "I'm right here buddy, right here in front of you", thinking he was really looking for me.  He ignored me as he retrieved his wooden box.

Also noticed how focused Scanlan is on the TV in front of him.  He really gets into the games and he was talking to the pitchers out loud.  I can tell you, if there was ever any doubt he is very passionate about the game.

We thought it would be a good idea if they got a live studio audience for the Post Game show, since it was more fun than we imagined to be a part of it.  I found myself watching the TV monitors more than watching the actual guys at times and had to remind myself that I was just a few feet from greatness.  I thought I should probably take some video with my camera and as soon as I turned it on Scanlan gave Dex and I a shout out on the air, which is the video at the top of the page.

During commercials people would come in and out and that was when Jenny Cavnar came on set with her red rain coat.  [Cue romantic music] She was nice and said hello, asked us how we were doing.  We talked over each other all flustered, stumbling over our words.  She thinks we are so weird, no doubt. 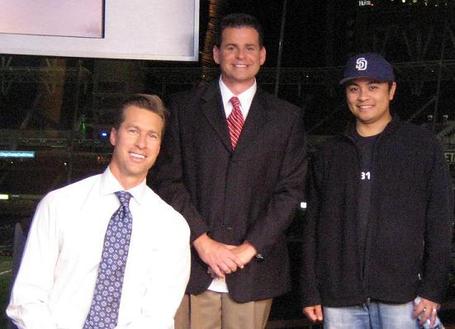 The show ended and much like Gilligan's Island, the three hour tour lasted much longer than expected. Steve Quis and Bob Scanlan said their goodbyes as we took to the streets in awe of what we had just seen.

Thanks to all the Channel 4 folks who were so nice to us, especially Bob Scanlan and Steve Quis who set up the whole thing.