Dex is telling me that you need to let the story tell itself.  I told him that the story sure is taking its sweet time and leaving out the good parts.

I'm just going to make a quick addendum here.  I'm getting really impatient.  Don't worry though this won't advance the story at all. 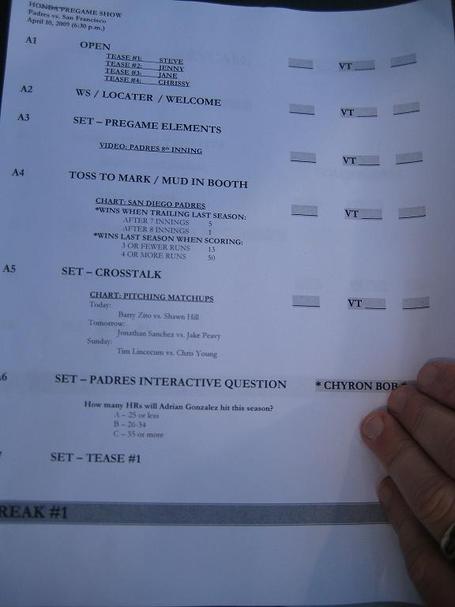 Before the Pre-Game show, Mr. Quis let us peek at the outline of the show.  I snapped a picture and skimmed it.  My eyes went straight to the bottom of the paper where it said "TEASE #1"

Mr. Quis went on to explain that they were teasing her segment.  Aaaah, gotcha.

While they filmed the episode we watched Zito warm up doing some long toss.  This video captures his last throw, but he was throwing the ball from the Padres bullpen to the visitor's bullpen on a line!  How far is that?   Answer: Far.