We met Steve Quis. He turned out to be taller than expected and, true to his word, he walked us back behind the batter's eye. Security guards came from left, right, in front and back to try to run us out of there, but Quis waved his press badge around as if he were King Arthur, his badge were Excalibur, and we were the fair maiden, Guienivere. In other words, after all the love Quis showed us, we were smitten as soon as Lancelot arrived in the form of Bob Scanlan.

Bob Scanlan is 6'8". That's ridiculous tall. Later in the evening, Scanlan let me try on his sport coat and I had trouble finding the end of the sleeves. Standing six or so feet away from him, my head was positioned at a 90 degree angle to make eye contact with him. Scanlan's also a little bit more blonde than one could tell on television. And his hair was held in a perfect wave above his head.

I'm not quite sure how Scanlan and Quis fit behind the Pre-Game desk. JBox and I sat in their chairs and our knees touched. Quis told us that Scanman's usually all business behind the desk, but sometimes Weisbarth will get a little bit frisky.

While Scanman was busy prepping for the pre-game and posting FanPosts on Gaslamp Ball, we had a nice chat with Steve Quis about the Channel 4 set up and the current Cox deal. From what I understand of the deal, the Padres are missing out on all kinds of money. I always figured that creating a regional sports network would be a proper next move once the Padres/Cox deal was up in 2011, but Quis talked about how expensive it is to run what Channel 4 does and how Cox uses it as a loss leader in San Diego.

I ran my thumb across my throat a couple of times and silently gestured in the direction of Scanlan. "Check it," I whispered to Quis. "I can save you a couple large each episode. You say the word and I'll put a call into Morgigno."

Steve Quis was carrying a couple of different media guides. 500 page data and trivia driven behemoths. We kinda figured he used them to bone up on who's who and what's what, but he actually used them to give himself a few extra inches in the chair to even things out between him and Scanlan. 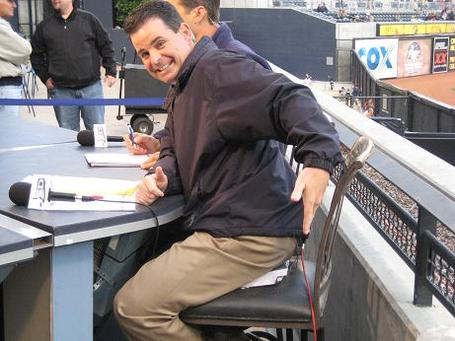 After they started the pre-game show, JBox and I found ourselves stuck back there with the guys. We didn't have any place else to go so we didn't mind so much, but still, we were getting hungry. While we waited, we watched Nick Hundley stretch and we Tweeted random thoughts while trying not to trip over anything. 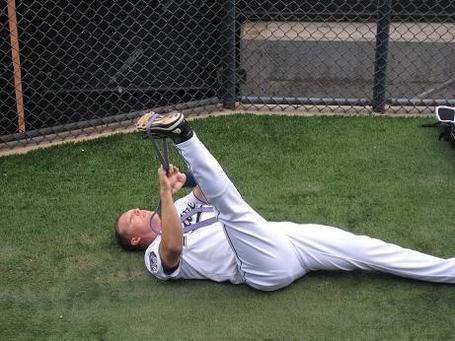 I thought more than a few times about crawling over next to Quis to try to distract him, but I thought better of it.

Here's a picture of me trying to figure out what to do next. 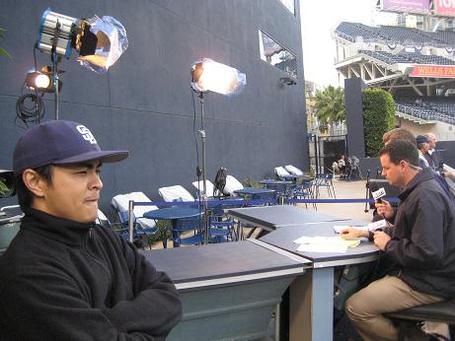 In Part III: Will Dex and JBox ever get something to eat? Are there any Gaslamp Ballers who are willing to meet us in person? What will Steve Quis show us next? Why does one writeup take more than two posts? What could possibly be happening next?