Peavy and Alderson to the Cubs?!

Share All sharing options for: Peavy and Alderson to the Cubs?!

The Chicago Tribune is reporting a rumor of Sandy Alderson taking the CEO job with the Cubs once the sale of the club is made final.

Another rumor making the rounds is that Peavy's boss, San Diego Chief Executive Officer Sandy Alderson, may be in line for a similar role with the Cubs once Tom Ricketts takes control of the team. The Padres are in the process of being sold.

Alderson didn't have any comment on the rumor, that means it's totally going to happen.  If there's one thing I know about Alderson after listening to his interviews is that when he's not answering questions in a really blunt and sometimes condescending manner, then something is afoot. 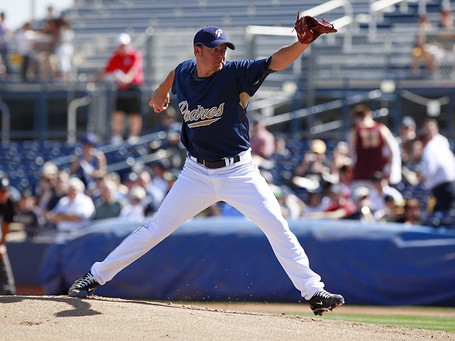 The title of the Chicago Tribune article is a little misleading don't you think?  I would have preferred if the title was "Jake Peavy's remains interested in joining the Cubs" because that'll happen over his dead body!

"Obviously, Chicago was a team that I did have an interest in playing for, and I respect [general manager] Jim Hendry and the organization," he said. "I respect a lot of the players they have and feel like they have a good bunch, and obviously [it's] a great city. [Those] were reasons I identified the Cubs as a team I wanted to be a part of if I had to move on from San Diego.

"Other than doing that, I just let the guys making the decisions make them. I have no idea [what will happen]. I know I'm here and I have to prepare like I'm a San Diego Padre."

No where in that quote does he say he is still interested in playing for the Cubs, I'm sure he probably is, but still.  The author however says "he still sounded like a man who'd readily leave paradise for Wrigley Field."

The Sun Times seems to be hinting around about Peavy leaving for the Cubs as well, thinking he might be a Cub by May

No, Cubs, No?  Peavy saga not over

''I have no idea what to expect,'' he said of how the Cubs saga might end. ''I'm just going to play as hard as I can for this team until I'm told otherwise.''