PSA from PSA are Public Service Announcements from Pad Squad Andre. PSA keeps Gaslamp Ballers informed of happenings that we should know about if we are to spend more time with Pad Squad Andre.-Dex 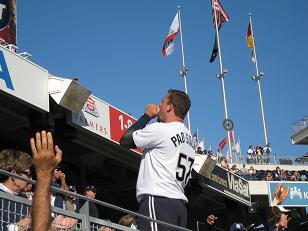 "When you are asked if you can do a job, tell 'em, 'Certainly I can!' Then get busy

and find out how to do it."

Happy Holidays to all those at Gaslamp Ball. As many of you know, the Pad Squad stay very busy in the off-season. This month, the Pad Squad is participating in many community events around the county. I have seen many Gaslamp Ballers at some events already this off-season, and I look forward to seeing you all at some of the other events this month.

This Saturday, December 5th, the Squad will be splitting up to participate in some parades around the county. I will be taking part in the Chula Vista Starlight Parade and Festival. The Starlight Parade gets into full holiday swing with carolers, floats, marching bands, drill teams, classic cars and, of course, Santa Claus. The Mayor's Annual Tree Lighting Ceremony will be held in Memorial Park before the parade. Pad Squad will have a booth at the festival and we will be giving out some Padres promotional items. You can also visit one of the tallest holiday trees in San Diego County and enjoy the sounds of the strolling holiday carolers before the parade kicks off at 6 pm. The route starts at Third Avenue and travels from E Street to H Street.

Other Pad Squad events this month include a Season Ticket Relocation Event, Caroling at the Cove, San Diego Nice Guys Christmas @ the Q, and other holiday magic events around the county. Another important event is the Season Ticketholders shareholder meeting on the 15th of December. Beyond just the great food at this event, it is also an opportunity for season ticket holders to hear firsthand the Padres plans for the future. I hope to see many of you at some of these events.

How to apply for the Pad Squad:

The Pad Squad off-season also includes the process of adding team members to the Squad. Probably the most asked question of current Pad Squad members is "How does a person become a part of the Pad Squad?" Well the process of drafting new "front-line ambassadors" is well underway. But it is not too late to for you to get your chance to be drafted.

To start the process, interested applicants should send a résumé and a clever cover letter to anyone in the Entertainment & Production Department or Human Resource Department. These two departments then take and read all the applications and then select a few to invite to participate in a few rounds of interviews.

The last couple of rounds of interviews are individual interviews. A variety of topics are discussed during these last couple rounds, but they all revolve around finding if the applicant would be a good fit on the Squad.

Many people have already applied, and I am sure many more will. I will say that sometimes it takes more than 1 or 2 years of interviewing to get an opportunity to be drafted onto the Squad. So if you have a desire to join the Squad, don’t hesitate to forward your résumé.

A few other important upcoming dates:

Pitchers and Catchers report to spring training on February 18th, with the frist game on March 4th.

The Padres open their season on the road April 5th against the Arizona Diamdbacks and come back for the home opener on Monday, April 12th against the Atlanta Braves.