Jon and I snuck into the Season Ticket Holder event tonight at Petco.  There was a huge line at the entrance, probably 300 people or more, all wearing Padres gear.  The reason for the line was that every Padre that lives in San Diego in the off season was out front shaking hands and talking to all the Season Ticket Holders.  Bud Black, Heath Bell, Tony Gwynn Jr., Adrian Gonzalez,  Kevin Kouzmanoff, David Eckstein, Everth Cabrera and Kevin Correia.

As we approached the entrance I saw President and COO Tom Garfinkel, so I gave him a wave and in return he gave me a hearty handshake.  We wished each other a Happy Holiday season and  moved on through the line.

I gave Everth Cabrera a good handshake and told him I was a big fan, he thanked me.  Then I saw Brett and Josh from Padres Media Relations and we exchanged pleasantries.  Last we spoke of them Dex was calling Josh a "bastard" in jest because he's a Red Sox fan, I'm glad they didn't take it out on me.

Next on the left was Kevin Kouzmanoff.  I'll tell you something I'm not the biggest fan of his, but he was super friendly and seemed really sincere when he thanked us for coming out and he was glad to meet us. He's got to be the most popular player on the team right now, he was cheered every time his named was mentioned tonight.  People were walking around with "Keep Kouz" signs, he's a phenomenon. 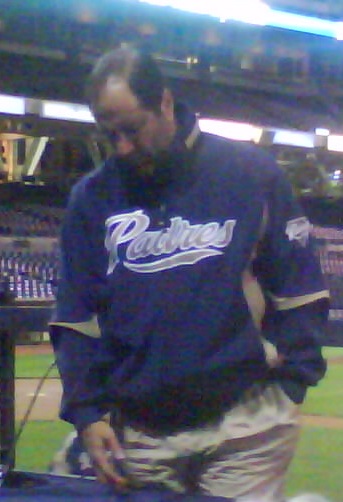 As we entered the gates, it was really surreal. There was just about everybody from the Front Office lining the sides of our path applauding us and thanking us for being Season Ticket Holders.  I mean these employees were looking us right in the eye and saying it sincerely.  I'll tell you something I was really moved.  They had been doing it for about an hour and they still seemed just as genuine and thankful as if we were the first people through the gate.  I felt kind of ashamed for walking through and not being a Season Ticket Holder, but I was glad that I could see it.

At that point Dex called and I'm like "I'm shaking hands with David Eckstein right now, hold on" and then he tells me that he probably won't be able to get out of work to make it down to Petco.  I'm like "Sorry, I missed that last part because I was shaking hands with Adrian Gonzalez."  I swear to you he has the softest hands I've ever felt.  It was like spanking a new born baby's butt with cotton candy. It was that soft.  It was nice to be able to say goodbye to him.

As soon as we walked in, there were people from concessions offering us free food and drinks.  All the Padres gear was 40% too.  We shopped for some Padres caps then grabbed some free pizza, drinks and pulled pork sandwiches.

Moorad wants to bring an All Star Game to San Diego

Once we found our seats Mark Neely came out to emcee the event.  He first introduced Chairman and Owner Jeff Moorad.  Moorad said a few words and I was kicking myself for not having a camera, a phone or anything to take notes with.  Seriously I'm the worst blogger.  He did say that his second biggest goal was to bring an All Star Game to San Diego, following only a World Series title in importance.

Moorad also mentioned that he understands how connected fans get to their favorite player, his favorite is Everth Cabrera.  I wonder if that gets awkward at all.  I imagine it something like Michael Scott's crush on the temp, Ryan, in The Office.

Next up was Tom Garfinkel, who told a joke about Hoyer wearing a jacket that made him look like Ron Burgundy.  Nobody laughed.  Garfinkel made some announcements: Every Thursday Game is now "Throwback Thursday"  the Padres will be wearing Brown and Yellow and the Park will only be playing organ music!  "No YMCA!"  I was so excited I was clapping my little heart out.   I remember when I had that idea back in 2006.

Garfinkel then announced that Dick Enberg would be the new TV voice of the Padres and that Enberg couldn't be at the Park tonight because he was being inducted into the Broadcaster's Hall of Fame.  A video message of Enberg showed on the screen and he thanked the Padres fans and told them that he took this job because his first love was always baseball and he's always followed the Padres.  He also gave us a preview of his home run call "Touch 'em all!"   Jon wasn't impressed with the call.

Garfinkel also announced that Season Ticket Holders would be able to enter the park a half hour early to watch batting practice.  That's what they call "added value" in the bizness.

Then to finish off on a strong note he announced to much applause that they would lower beer prices by a considerable amount, along with hot dogs, drinks other concessions.

Next up was Jed Hoyer.  He came out and went through his standard schtick about how the weather is different between Boston and San Diego and that he can't believe he was standing outside without a jacket on.  The crowd ate it up.  We love hearing about how great San Diego is.

Bud Black came out next and said a few words.  Neely introduced him as being a very even keeled manager, Mr. Steady.  Black said a few words but I nodded off to the sound of his voice so I missed them.

The first question was about people who didn't have Cox and couldn't view the Padres game.  Garfinkel and Moorad said this issue was one of their biggest priorities and admitted that they are still under contract with Cox for another two years.  They were negotiating to see if they can work something out for 2010.  Moorad thinks it's ironic and sorta funny that John Moores can't watch Padres game from his home in Rancho Santa Fe.

There was another suggestion that there be a day where Season Ticket Holders can all donate their tickets to the Military so that they can have nice seats for a game.  Ticket Holders said with applause that they'd like to do this.  Garfinkel said he'd make it happen.

Another guy complained that there should be a net over the centerfield fence protecting the babies and children digging in the sand box beyond the fence.  The Padres don't think it is necessary at this time because nobody has been hurt yet.  Instead they will only get players that cannot hit home runs.

Another lady asked a real general question about if they thought there should be a salary cap in baseball.  Moorad 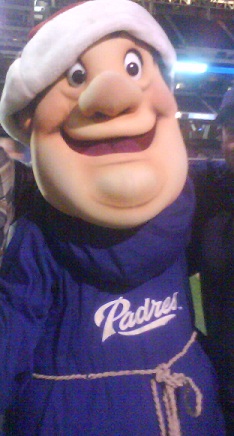 decides to field that question and starts off by asking if there is any media in attendance.  He looks around and says "This is off the record to the media... and to Gaslamp Ball"  At the mention of us, Jon starts cheering and clapping, he's the only one.  I honestly didn't even hear his answer to the question because we were laughing and tickling each other at the very mention of the site.  Can somebody tell us if he was in favor of the cap or not?  I think he was not in favor, who knows.

Somebody else got up and said that it's nice to have Jed Hoyer because he's easy on the eyes and that his wife had a crush on him. He questioned Hoyer about what he was going to do to keep Gonzalez in San Diego?  His question got the most cheers of the night.  Hoyer blushed at being the focus of the crush and talked about what a great player Adrian is.

That's all I really remember but I didn't have a pen to take notes.  The Padres then raffled off the players jerseys and let the fans walk out on the field.  Jon and I frolicked on the grass.

I talked to Warren from Media Relations and was introduced to Padres VP Dan Migala who was friends with Dex back when he was in North Carolina.  He claims that he and Hoyer invited us to get beers but that Dex never replied to his email.  He was also proud to be the target of some ribbing on Gaslamp Ball.

On the way out we grabbed a ton of leftover souvenirs from the season that will probably fill my trunk for the rest of the year.  Really fun night.