Over the summer I went to Portland for work and I managed to catch a Beaver's game. Portland's downtown reminds me a lot of San Diego's downtown in that it's not overly dangerous and terrifying at night like downtown LA and you still feel like you're outside when you're outside, unlike Manhattan.

After my meetings, I cut out of work and took a cab to the ballpark. It was about an hour after first pitch and the ticket windows were all closed. I walked up to the gate and, after a few batted eyelashes, scored a free ticket. I bat my eyelashes like Bud Black bats different lineups - often and with wildly varying effect.

PGE Park is very much an old style looking park. Past the right field wall, the park is built right up against a building, which I was later told by a Portland native is a health club. The whole thing sunk a bit into the street. No outfield seats except for some bleachers at the health club that you can walk out to. I assume that, after workouts, the gym patrons can go out to the bleachers, watch a game, and see what people who are really in shape look like.

The outfield scoreboard is one of them old timey time wooden boards that needs somebody back there to constantly update. Updating the scoreboard is always portrayed as something romantic. Like the 106 year old man who has sat behind the scoreboard at Suchansuch Ballpark since 1908. Really, I imagine the job to be dark and dreary. Something reserved for criminals and interns who don't take to Excel as quickly as you might like.

Here's a real blurry photo of it: 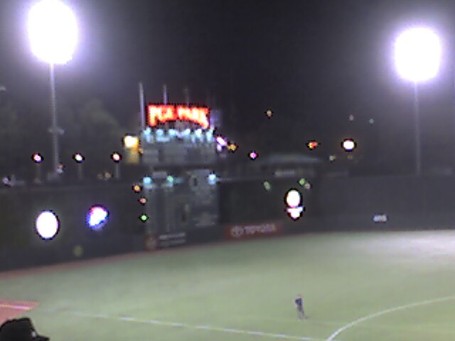 I don't recall much about the game except for what I might have tweeted at the time. I remember we were winning when I left the hotel and we were losing by the time I found a seat.

Above the seats is a wooden overhang that appeared to extend out and cover all of the seats. It rains a lot in Portland so I figure it keeps people in their seats during delays. 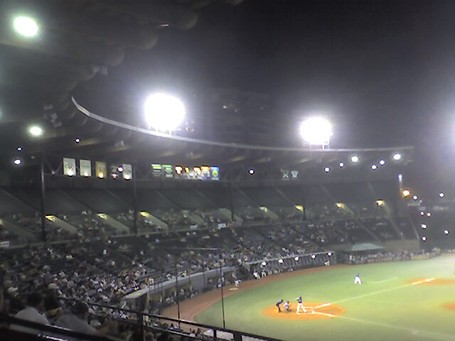 The other thing it does is make for amazingly loud echos whenever music is played or the fans get excited and cheer. The sound just reverberates up into the rafters and directly down into your ears.

Not unsurprisingly, the American Tinitis Association had a booth set up out on the concourse area near one of the exits. No lie.

Outside of the park there are huge faces guarding each entrance from Portland spirits. They are terrifying and ghastly. 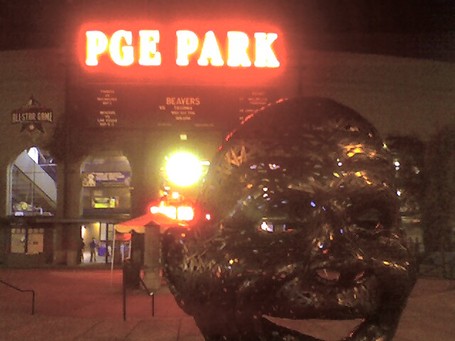 After the game, I walked back to the hotel. It was a Thursday night and about 11 blocks away. Downtown Portland is nice at night. I don't know what they do with the homeless people. Probably, they remind them that it rains all the time and they should seek more temperate weather, like San Diego or something.

As I understand it, there are plans for a new better ballpark, which makes me kinda sad. The current ballpark is nice and old school and seemed to be well attended. It was college beer night or something, so that may have had something to do with it, but still. Lots of cities build new ballparks to recreate the look that Portland's current ballpark has.

I be glad I bagged it when I could.