Prepare for Padres games to start at 7:11 next season, Dan Migala has been hired

Share All sharing options for: Prepare for Padres games to start at 7:11 next season, Dan Migala has been hired

Migala's received praise from the sports marketing community after suggesting the Chicago White Sox change their game times to 7:11 p.m. to appease 7-Eleven, a potential sponsor. The idea was sold instantly, achieving many accolades including earning Migala a lifetime pass to the National Baseball Hall of Fame in Cooperstown, N.Y.

Seriously that's it? That's the big idea?  That's what gets sponsors all hot and bothered?  Huh. 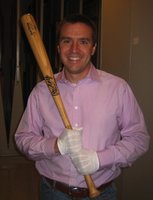 I was just kinda searching his name on the internets to see what else he's done and came across the website for the book that he wrote.  Apparently his friends call him "Danny Baseball" and he likes to jam on his Gibson guitar.  At the end of his bio, guess what shows up again?  Yep, the 7-11 thing again.

Dan's friends know him to spend his free time strumming his Gibson guitar, having a good time or simply dreaming up his next big idea to help a team, charity or corporation.

His most recent "big idea" was advising the Chicago White Sox to change their gametimes to 7:11 p.m. to appease 7-Eleven, a potential sponsor. The idea was sold instantly, achieving many accolades including earning Danny Ballgame a lifetime pass to Cooperstown and making the 8-year old inside of him giddy with joy!

No offense, but he sounds like a one trick pony to me.  Time for another one of those big ideas and quick.

Prepare for Padres games to start at 7:11 very soon.

I forgot that we pimped his book back when it came out.