Jed Hoyer is the next Padres GM

Share All sharing options for: Jed Hoyer is the next Padres GM

Is it okay for Gaslamp Ball to announce that the new Padres GM is Jed Hoyer?  Probably not, but seriously Jed Hoyer is the next Padres General Manager.

Do I have any proof?  Of course not.  I have circumstantial evidence and a gut feeling and really that's all I need.  Listen to me, Jed Hoyer is the next Padres GM.  The first name we heard in rumors was Jed Hoyer and unlike all the other rumored candidates his name has never been denied. 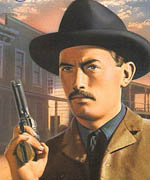 It kind of reminds me of a movie "The Gunfighter" starring Gregory Peck.  Peck plays the part of a infamous gunfighter Jimmy Ringo.  He comes back to town, not looking for trouble, just hoping to reconcile with his estranged loved ones.  A hot headed young wannabe gunfighter shoots Ringo in the back, looking to make a name for himself.

The town is ready to string up the kid after the town marshal beats him to a bloody pulp.  Peck as the dying gunfighter tells the marshal to let the kid go.

“Turn him loose, let him go, let him say he outdrew me fair and square
I want him to feel what it’s like to every moment face his death”

I forget the point I was trying to make there once I got into summarizing the movie.  It had something to do with both Towers and Moorad being gunslingers.

Okay wait, Towers was Peck and Moorad was the brash young gunfighter.  Towers was a gunslinger out of necessity and it was just as easy to critique and fire him as it was to shoot him in the back.  Now Moorad has to face the tough conditions that Towers lived with while GM of San Diego.  Something like that.  It doesn't matter, I got off topic somehow, my point is that Jed Hoyer is going to be the next GM.