Kendra Wilkinson is a Padres fan, yet will wear any number of opposing team jerseys

Share All sharing options for: Kendra Wilkinson is a Padres fan, yet will wear any number of opposing team jerseys

I was just watching this interview with Kendra Wilkinson on BDSSP (hat tip to Drama ) and surprise, surprise John Salley calls her out for wearing another teams jersey!

As a Lakers fan she wore a Denver Nuggets jersey, when the Lakers were playing Denver in the Post Season:

"I wore it for a minute!" Kendra exclaims, trying desperately to defend herself.  She even claims that she was going to wear her Lakers jersey beneath the Nuggest jersey and reveal her true allegiance to the crowd, but conveniently the airline lost her luggage so she didn't have her Lakers jersey.

Kendra we forgave you for the Dodgers jersey , but this has got to stop!  Don't even try to tell us that the Indians are your American League team.  I can't hear the excuses any longer! 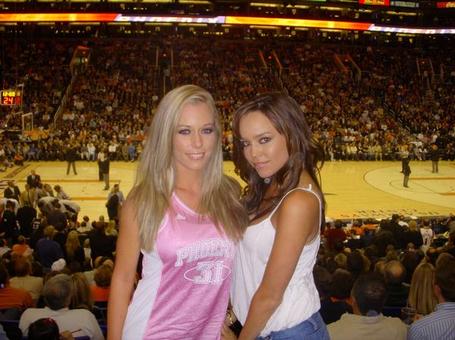