A San Diego Padres Fan Manifesto and the Matrix Trilogy

Share All sharing options for: A San Diego Padres Fan Manifesto and the Matrix Trilogy 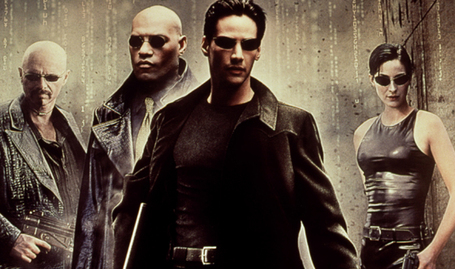 I was just thinking about how the Padres in recent years could be equated to the Matrix trilogy of movies. Say you take the 2006 and 2007 season and group them together. That forms the basis of the first movie. Good times. Action. Special effects. All that good stuff.

Then take the 2008 season. That's the second Matrix movie. It sucks hard. Terrible terrible times. Not enjoyable, though technically sound and it's pretty much all the same people in charge and I know those people know how to make a good movie. It's just that, this time, they haven't.

The 2009 season is the third movie. You all remember that feeling that everybody had after coming out of the second Matrix movie. We know that the third movie is going to be terrible going in because they basically filmed them at the same time. There was no opportunity between the second and third Matrix movies to make that last one better. The third one was already in post production by the time the second one came out and we all realized how bad it sucked. The writing is on the wall.

Meanwhile, the Wachowski Brothers (the Padres Front Office) was also doing all of this really interesting stuff on the side that kinda, but not really, contributed to the end product of the films (i.e. graphic novels, video games, animated dvds). Think of those things as the Padres DR facility, World Baseball Classic, inner city youth stuff, fleshing out the minor leagues through draft. Stuff that's great on the whole, but none of which will help the fact that this third Matrix movie (which we have yet to see) is still going to suck really hard.

All that rambling leads me to this thought: What is the Padres goal for any given season? And the answer is this: To entertain us.

"No," you might say. "The goal is to do whatever it takes to put ourselves in a position to win a World Series."

Well, my question to that would be, why do we want them to win a World Series? Increased revenue? To lure better free agents? Better marketing posibilities? As a status symbol for the city? Don't confuse yourself with the front office or the newspaper people or the sponsors (unless you actually are one of those people).

I contend that the only reason the Padres should be doing anything is in an effort to entertain us. I want to win a World Series because, seriously, ticker tape parades and gloating to Dodger fans and seeing banners hung up around the city would be goldarn entertaining. And I want the process of getting there to be great too. I don't want a terrific ending tacked onto a bad movie. I want the whole movie to be good. All of that stuff at the end and afterwards would be great, but the road to the World Series would (and should) be entertaining! I want to see a bunch of impressive wins over other great teams because it would be fun to watch.

Sure, plenty of people find the side stuff entertaining. I enjoyed the Matrix offshoots as much as the next guy. I also enjoy seeing the off-the-field stuff and the stuff that contributes to the Padres legacy as a whole, but in the end, much like the last two Matrix movies, this last season and off-season have soured me on the whole thing, and no... In fact I was not going to forgive the second and third films because I liked the first one. Doesn't work that way. All of the fancy whizbang stuff on the side was great, but isn't going to fix the end product.

To give another geek analogy, I was disappointed by the Phantom Menace. I told this to a friend of mine who's response was, "You should read the novel. It does a better job of the story." The novel? The novelization of a movie is what I need to read in order to enjoy this thing? Why are you making me look over there? I see what the real product is. It's this here crappy movie.

I think that's what frustrates me about some of the response regarding the Padres. Am I supposed to find the cutting salary entertaining because the people cutting salary are good at their jobs? Am I supposed to supplement the actual product on the field with all of this extraneous stuff that I may or may not be interested in? Is the facility in the Dominican Republic and the promise of great new players years down the line supposed to make up for what we can see coming in the 2009 season?

Maybe so. Maybe not. Either way, I'll enjoy the side stuff on the side and I'll watch the Padres, but I won't blame anybody who'd rather watch them on TV for free.