Share All sharing options for: Rickey Henderson offered $1 million to enter Hall of Fame as a San Diego Surf Dawg

We stood by Rickey in 2005 when no major league team would sign him and continue to support him with this offer. We are confident that Rickey will be a first ballot selection and we look forward to seeing a bronzed Surf Dawg cap displayed on his Hall of Fame plaque.

Rickey is famous for talking about himself in the third person, but if he refers to himself as "Gaslamp Ball" we will give him a free t-shirt and allow him to blog 3 times a week, that's our final offer. 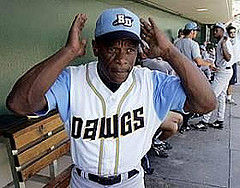 With apologies to Indescent Proposal:

Golden Bear League CEO:  Suppose... I were to offer you one million dollars for one night with your wife... I mean to go into the Hall of Fame as a Surf Dawg.
Rickey's Agent: I'd assume you're kidding.
CEO: Let's pretend I'm not. What would you say?
Rickey: He'd tell you to go to hell.
CEO: I didn't hear him.
Rickey's Agent: I'd tell you to go to hell.
CEO: That's a reflex answer because you view the question as hypothetical. But let's say that there was real money backing it up. I'm not kidding. A million dollars. The induction would come and go but the money could last a lifetime. Think of it. A million dollars. A lifetime of security... for one induction. Don't answer right away. Just consider it; seriously?