I watched Jose Canseco: Last Shot last night on A&E.  It was really dumb.  If that review really makes you want to see it, it's on again tonight. 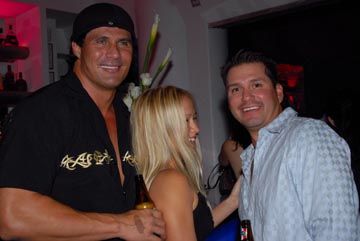 The premise of the show is that Canseco is finally quitting steroids after 25 years of use.  He says he regrets ever using steroids and writing his book that incriminated his teammates.

The problem is that Canseco still seems proud of how he was "the greatest baseball player of that time" or being "the Godfather of Steroids".  To me it was like the former gang member that tries to help kids stay out of gangs, but loves to tell stories of all the money he made, all the crimes he committed and how tough he and his gang were.  You can tell that he'd do it all again if he wasn't so old.

He could also be compared to the over the hill Rock Star that is clean for the first time in his life.  He tries to tell you how bad drugs are but then in a argument he'll say things like "I've snorted piles of coke bigger than you!" and you can tell that their hard partying stories make them feel macho and they don't really regret a thing because it defined them as a person.

The scenes in the show were pretty ridiculous.  Jose tells a doctor how he quit steroids cold turkey and now he is depressed and emphasizes several times that he has no sex drive, "ABSOLUTELY ZERO".  He tells the doctor that he's determined not to use them again but in the same sentence says he isn't sure if he should take some other medication or start using steroids again.

There's also a scene where he visits his house that is in foreclosure because he didn't pay the mortgage.  It's all locked up with all of his personal property all inside, the grounds are in complete disrepair.  The house has been chained and locked up by his creditors.  They film Jose kicking down a gate and bragging about how this mansion used to be all his and all the work he put into it.  They show Jose jiggling the door knobs as he looks through the glass at his possessions.  He jiggles the same door knob like 10 times even though it has a huge chain and lock around it.  He tries to make it seem so dramatic.  "Look that's the breakfast nook where I used to eat my Captain Crunch, look over there I had that tile installed.  There's my stereo still sitting there!"  It's so dumb.

He then complains how he doesn't get to play baseball anymore even though he ran out on a contract with the Long Beach Armada.  They film Jose attending an Armada game and he is delivered court papers for skipping out. Jose is near tears and just can't believe anybody would do this to him.  If he wanted to play baseball so bad why didn't he finish his contract or at least play in a hard ball adult league instead of his co-ed softball league?

The show takes itself so seriously so it's almost comical to watch.  Jose is broke but instead of renting a regular apartment he rents another mansion and has a few really nice morotcycles.  Canseco might be taking steps to becoming a better drug free person, but trust me they are baby steps.  The show ends with a long motorcycle montage and a note saying that Jose was busted for bringing illegal drugs across the border.