This is what Petco Park was supposed to look like

This is a rendering of the Ballpark from back in 2000. 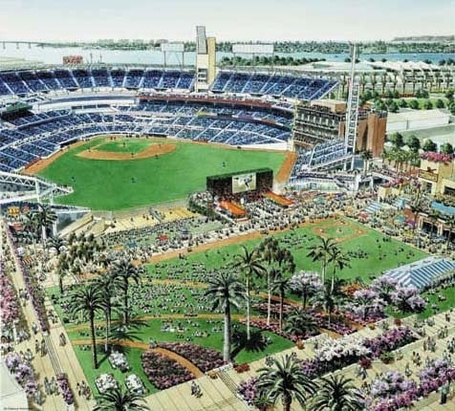 I remember looking at this picture a few years ago and thinking that the Park in the Park looked nothing like what was actually built.  It's starting to come around though.

Until this year there were no trees out there, it was just all grass and the wiffle ball diamond.  Now they've got trees, Tony Gwynn statues and dead grass. Maybe they decided they didn't need tall palm trees since there are towering sky scrapers on all sides blocking out the sun that hits the ballpark.

It's interesting that they have walking paths all over the drawing.  Why would you need a walking path?  Who would rather walk on dirt and gravel than grass?

The flower beds are a nice touch but you'd probably just get homeless people using that area as a bathroom.  If you know homeless people like I do, then you know they are always looking for flowers to let loose on.

You know what recently turned me off on the Park in the Park?  I went there one day when there was no game.  The park remains open for residents to frolic.  It was really a disappointment that it is being used as a dog park.  There were easily thirty dogs there and they were doing their "business" everywhere.  I was thinking, you know I'm sitting and laying down in that grass during games, and I'm laying in dog excrement.  Since then I've taken a closer look and there are yellow spots all over the lawn out there.  Maybe dogs shouldn't be allowed in an area that is being sold as seating for humans.  Just a thought.

Who does the maintenance on the Park in the Park lawn?  Is that the same grounds crew that works on the field?  I doubt it.  Luke Yoder and his crew are so strict about on the field activity.  I've been down there a few times and I swear they yell at people for even looking at the grass, let alone walking on it.  This is a place where ballplayers slide, spit and walk on with cleats and yet they freak out at fans for stepping on it?

It also kinda bugs me that the second that the game ends guys come out with leaf blowers, rakes and little carts and instantly start doing work on the field.  I know they have to get home but can't they wait like a few minutes for the fans to take their pictures and exit?  I know I was trying to take a picture of Hoffman's 500th save and he's up on the teams shoulders and I have a picture of a grounds crew guy with a leaf blower walking in front of my shot.  At very least wait until the team exits the field for crying out loud.  Hell, why not just wait to prepare the field until the next day.  It's just dirt and grass.  I digress...

But my whole point is that maybe they need someone a little bit more serious about keeping the Park in the Park clean and groomed and at the same time relaxing a bit with the on the field maintenance.

Back to the Ballpark drawing.  What do you think they were planning to use that tented area for in the lower right hand corner?  I'm guessing that it was a designated area for playing grab ass. It's your classic grab ass tent that they used to have at old timey time ballparks, for when it got too hot to play grab ass out in the heat of the day.

They should come out with a new SimCity game where you can design a ballpark. You get to set up the seating, the location in the city, the entertainment, etc. I'd totally play that, for one reason I'd be good at it. I'd put up a ferris wheel and stuff Shamu into the outfield walls and that's only the beginning.