MLB, Chewing Tobacco and a Solution

Share All sharing options for: MLB, Chewing Tobacco and a Solution

I was just reading a little bit about the use of Smokeless Tobacco.  I was wondering if the teams buy the chaw for the players or if they have to bring it from home themselves.

Oral Cancer Foundation:  So, why do baseball players chew?

Clubs cannot provide tobacco to players, a radical change from the days when clubhouses brimmed with cartons of cigarettes, pouches of tobacco and tins of snuff.

In 1993, MLB banned the use of tobacco by all minor-leaguers not on 40-man major-league rosters and therefore not represented by the Major League Baseball Players Association. MLB hoped the bottom-up approach would wean players from tobacco before they reached the majors.

The article even mentions one of our San Diego Padres. Chewing tobacco contributed to the 99% blockage of Doug Brocail's broken heart.

Anyway you're saying to yourself, "Okay we know that chewing tobacco is bad, but what is the solution?"

It's simple really.  I can solve this problem with two words... wait for it... Teddy Grahams.  What manner of man or beast would choose a disgusting addiction for chaw when they could stuff their face with deliciously nutritious Teddy Grahams? 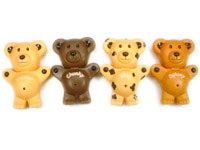 Look how cute they are.  Would you rather look at these little dudes or the frightening affects of chewing tobacco on google.  That's what I thought.

Fill the clubhouse with Teddy Grahams, that's my answer for all of baseball's problems, from now on.