The Littlest Padre with the Biggest Heart

Share All sharing options for: The Littlest Padre with the Biggest Heart

So here's another Memorial Day Weekend treat for you all. Gaslamp Ball's first write-up in the Friar Faithful 100 is up now. Go on over there and read all about Fred Norman. Before Jake Peavy set the record for strikeouts in a game at 16, there were three Padres that actually held that record. Randy Jones, Sterling Hitchcock (a game which we attended), and Fred Norman.

Who is this Fred Norman, you ask? Well go and find out. 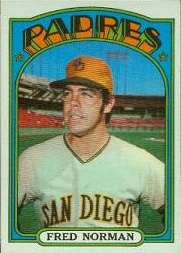 Fred Norman was really not a good pitcher for a solid 7 or 8 years to start his career. He may not have been horrible, but nobody would blame you for trying to make that argument… except for the fact that it’d be a little bit prickish to do.

He was not good (and arguably he was a little horrible) for those years and then he came to the Padres in 1971. The 1971 Padres, of course were terrible. Terribly horrible. The 1971 Padres were one of five Padres teams that managed to lose 100 or more games. Terribly, horribly horrendous team. Somebody get me a thesaurus. Abominable. Execrable. Actually, it wasn’t that bad. Their Pythagorean win/loss was 64-97. So they sucked and they were unlucky.

Norman wasn’t even a shining star on that ’71 team. A 3-11 record kept him out of Cy Young contention, but a respectable (and career best) 3.32 ERA endeared him to management and they kept him around. Maybe out of pity.

Also, he was kinda short. A little guy.

At this point, you should probably be asking yourself why Li’l Fred Norman even gets a whiff of the Top 100. After 1971, Norman would only pitch one more full year with the Padres. And the ’72 Padres weren’t a heckuva lot better than the ’71 Pads. I’ll tell you why. Something crazy happened to Fred Norman.

Me, personally? I think he lost it. Something clicked in his little head and he decided that he was seriously effing sick of these bad teams screwing up his shot at the Hall of Fame. He was sick of his friends laughing at him and his dog peeing on his shoes. He was sick of being short. Something made him decide that he was going to start getting wins no matter what.

Norman started the ’72 season off pitching a complete game against the Dodgers, giving up one run, and still the Padres managed to lose the game. That only made his rage grow.

On May 2, he picked up his first win. Another complete game. Another game with only one run surrendered. At this point, maybe he realized that he couldn’t leave anything to chance because he went on that season to pitch ten complete games with six shutouts in the mix. That’s a Padres record that only Randy Jones has since matched.

Score one for shorty.

And after all was said and done, he still only went 9-11 for the Padres.

And then they traded him away… To the Reds who were probably sick of this little guy schooling them so much on the mound.

But for a few brief moments in time, Fred Norman wasn’t just any little guy. He was our little guy. And when he was pitching, it wasn’t his height that carried the team. It was that big heart of his.

The Littlest Padre with the Biggest Heart.